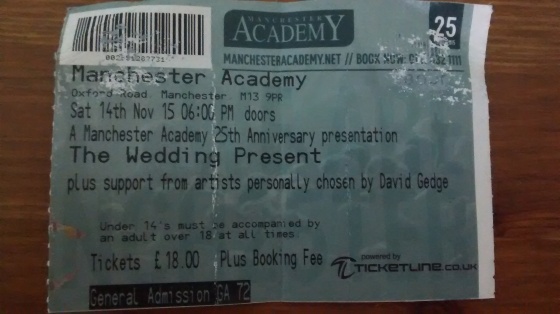 If The Wedding Present weren’t still gigging, I might never see my oldest friends. We’ve been going to their gigs together since 1989, seeing them in Portsmouth, Reading, Stoke, Wakefield, Holmfirth twice, Liverpool twice, Manchester many times and London too many times to count. These days we’re all living in different parts of the country so we use these events as an excuse to meet up, have a few pints and see if we can still hack it in the moshpit.

Most of the Wedding Present gigs we’ve been to in the last decade have been whole album shows where we’ve seen our favourite albums played in full. But this one was just a straightforward set with support acts chosen by David Gedge himself in celebration of the Academy’s 25th birthday.

After showing my tourist mates some of Manchester’s most important historic sights (the Holy Name Church namechecked in Vicar in a Tutu and yer actual Cemetry Gates), we missed ex-Delgado Emma Pollock‘s solo set unfortunately.

The Holy Name Church. Lead-lifters of the world unite and take over.

But we did see her perform 2 songs with Cinerama, both of which she sang on the original recordings. Wah wah heavy B-side “Love” was great but “Ears” has always been a big favourite of mine. It’s a rather curious tale of listening in on your ex making whoopee with her new beau. Is there a word for that, you linguistic experts out there? I know that if you were observing them visually that would be called “voyeuristic” but is there an aural equivalent?

As well as the 4 musicians from the headline band and the 2 additional keyboard players I saw them with at Indietracks, the lineup has expanded further to include flute and trumpet. This really added to the sound, especially on “146 Degrees” and the appropriately-titled set closer “Wow”

Next up was Badly Drawn Boy playing a home match. Tough gig for him really because I don’t think that many people in the crowd were that interested in seeing a solo artist and you could hear a lot of chat in the crowd. I’ve heard people rave about how great he is live and others say he’s shambolic, unnecessarily aggressive to the audience and just shit.

Having seen him live for the first time tonight, I’d say all of those points are valid.

He messed up a few guitar parts, abandoned some songs halfway through for no apparent reason, announced that today was the happiest day of his life. That raised a few eyebrows given the news events of the previous night but he explained that it was because his girlfriend came back to him. “I love you Leanne” he proclaimed, reminiscent of Johnny Vegas when you’re not quite sure if he’s acting a character or whether he genuinely is having some kind of breakdown.

He told us and told us again how honoured he was to be opening for The Wedding Present but then he said that David Gedge was one of the worst singers ever and has no sense of humour. He flicked the V’s at the crowd a few times without much, or indeed any, provocation. He didn’t seem to be that sure of what he was doing and saying. It all left me wondering if maybe he’s a bit too keen on helping the economy of Colombia.

But you know what, when he stopped wittering on and just sang it was actually bloody good.

He wandered offstage having said his goodnights before a crew member seemed to tell him that he needed to play for longer and pushed him back out on the stage. He finished up with a solo version of “I Wanna Be Adored”, a surefire crowd-pleaser in Manchester but definitely a song to add to the list of “songs that don’t really work without a band”.

So on to the main event then. Regular readers of the blog (hello again to you both) will know that I am a massive Wedding Present fan so you know what’s coming. It was a bloody great gig. Genuinely one of the best I’ve seen out of the 30-ish I’ve seen. Part of that was due to a lively crowd and a great setlist taking in every era of the band. 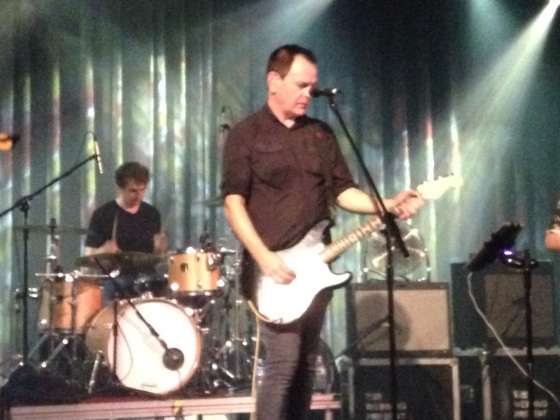 There were a few new songs in there, the most immediate of which was “1000 Fahrenheit”. New album in 2016 maybe?

We leapt around down the front with a load of other people old enough to know better. They played “You Should Always Keep In Touch With Your Friends” and I looked around and smiled to see that this band have helped me to do just that. 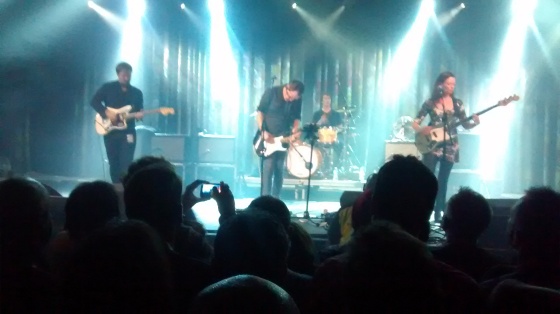 They finished up with “My Favourite Dress” which I’m pretty sure was the song that got us all hooked in the first place. As we walked back to the car in the stereotypical Manchester rain, we tried to figure out what it was that made this band so special to us all. It can’t just be nostalgia because other bands we liked in our teenage indie-disco years are still gigging but we don’t really bother with them these days. We all loved The Fall but can barely work up enough enthusiasm to keep buying their new releases. We all hero-worshipped Billy Bragg but none of us still buy his records or would go to see him now. We all agree that Inspiral Carpets at Brighton Top Rank in 1990 was one of the greatest gigs since the dawn of humanity but none of us are remotely interested in going to see them in 2015. So what makes The Wedding Present different to those bands? Are these other bands just not as good as they used to be? Or maybe they weren’t even that good in the first place? (hello there The Wonder Stuff)

As Pompey Mike said on the drive home: “They never disappoint.” 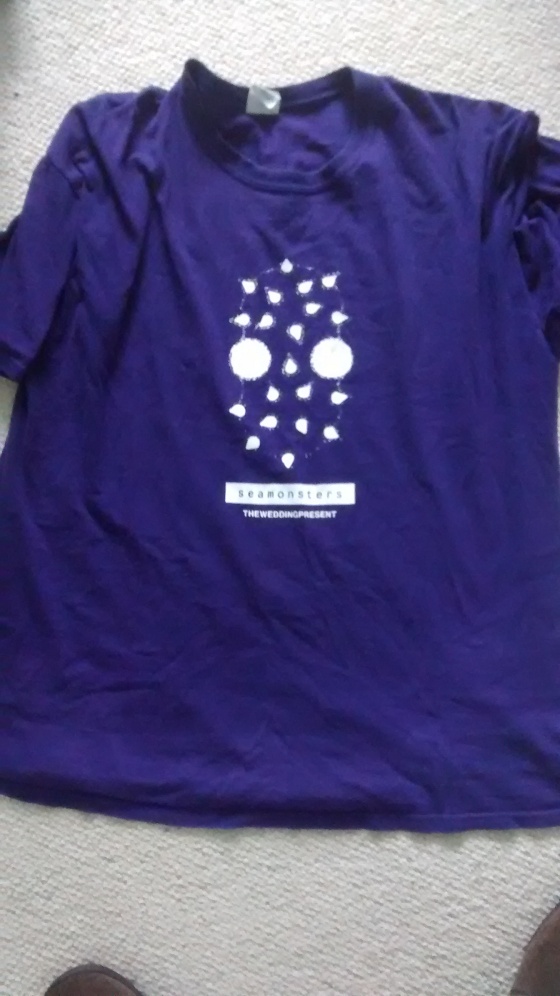 The gig was on Saturday, it’s now Wednesday and my t-shirt is still soaking wet.

The individual verdict from me and my mates:

Travelled from: near Manchester

Highlights: Come Play With Me, Deer Caught In The Headlights, Flying Saucer

Highlights: My Favourite Dress & Everyone Thinks He Looks Daft

Bebbo a.k.a. The Human Lamp-post

Highlights: “all the old ones”

Travelled from: not jetting in especially from New Zealand disappointingly but half an hour from Manchester

Highlights: ears are still ringing from “No Christmas”

Highlights: Dalliance and Dare. He added “with my besties”. Not quite sure when this middle-aged man who I’ve been friends with for more than 30 years has suddenly started talking like a 9 year old girl but anyway luvs u gorge BFF wit woo ❤♡❤♡❤♡ xxxx

Check out my “Seamonsters” pint glass, handmade by Mr Fingers.

Thanks for the photos go to Tom, Mike and Anthony McDonagh from the Facebook group “David Gedge’s Barmy Army”