This evening brought news that Lou Reed had died.

Unlike other wizards, I never saw Lou Reed perform live and looking at my record collection I can only find a handful of his LPs. I do own all the Velvet Underground albums, but, if I am being honest, rarely listen to them now. And yet, Lou Reed’s passing has touched me.

Within an hour of first learning of his death, I saw comments on social media from musicians whose full discographies I do own and who I do listen to regularly. Artists such as Chuck Prophet, Edwyn Collins, Stephen Jones, Luke Haines, Amy Rigby and Darren Hayman. All clearly upset by his death. And I guess this is the point. Without the music Lou Reed made and the influence it has had, those artists and virtually all those I love would not sound the way they do. So, thanks, in a very real sense, for all the music, Lou.

The Velvet Underground album Loaded is my favourite. It might not have all the coolest songs on it, but it was a cassette version of the album that was permanently played in the car as me and the future Mrs O’Elves first drove away from the UK together. Only as far as Germany, to be fair, but still. It’s one of our ‘important’ albums.

“I very nearly met Lou Reed once. I saw him play at the Shepherds Bush Empire in 1996.
After the gig, me & my mate were getting some drinks at the bar and we noticed that the man himself was standing very close by smoking an enormous cigar and chatting to someone.
Me & my mate had just worked out how we were going to start the conversation but then we realised that the bloke he was talking to was Salman Rushdie!
So we decided to let Lou carry on with his discussion rather than interrupt him to ask if whether he wanted a pint of Stella.”

I also happen to know that Rebel Rikkit did, at one stage in his life, own all Lou Reed’s records, and that these once, very literally, kept him from a life of poverty. Today Rebel describes Lou Reed as “[a] very bad influence on me but a genius none the less.” 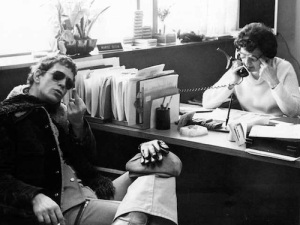 Undoubtedly there will be better placed people who will share more poignant memories and insights into the passing of Lou Reed, but when it really comes down to it, for us wizards, it was all about the music.

Here are our favourite songs.