Back in March, I wrote this post about how Steve Nieve’s videos were helping me stay positive during lockdown. They’ve stopped doing them every day now but at its peak Steve had his long-term bandmate Elvis Costello regularly dialling in to play and sing along with him. These performances are an absolute joy to watch, even though they are frequently disrupted by all the technical and temporal issues you may expect when there are 8,000 miles separating them! One of my favourite videos they’ve done so far was this Colours special.

As E.C. has remarked a few times in these videos, he really enjoys getting the chance to play songs they’ve never played before. It was a real treat to hear him sing the John Sebastian song “Rainbows All Over Your Blues” here, a song I’ve loved ever since hearing it in the “Woodstock Diaries” film. As far as I know that’s the first time Elvis has ever played that song, although he previously covered another Sebastian song from the same album (“The Room Nobody Lives In” on the b-side of “Veronica”)

Anyway, hearing Elvis and Steve play so many great songs in this video inspired me to make this playlist of my favourite Elvis Costello songs with colours in the title.

“Green Shirt” is one of Elvis’ best known songs and probably my favourite on the “Armed Forces” album. The live version The Imposters were playing on the recent tour was just brilliant too. “When Green Eyes Turn Blue” from the “North” album was the only other contender, but in my opinion it’s not one of the standout tracks from that album. 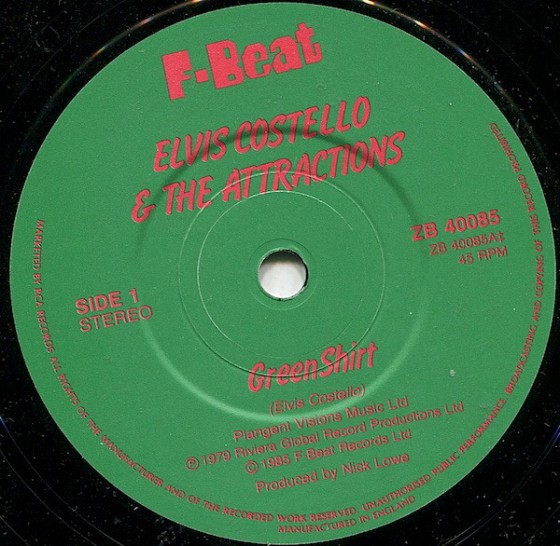 Moving on to a more specific shade of green, I think “Under Lime” might be unique amongst all of Elvis Costello’s 600+ songs because it is a sequel to one of his previous songs. The 2010 song “Jimmie Standing in the Rain” tells the sorry tale of a musician struggling with his health and with making a living waiting on a rainy train platform somewhere in Lancashire. Speaking in a 2018 BBC interview: “I imagined a guy going round the music halls where my grandfather played… traipsing round the north of England trying to sing cowboy songs… He’s a travelling musician, he takes comfort in the arms of a woman that calls him by another man’s name.” Elvis then goes on to say that there’s a little bit of him, his father and his grandfather in this travelling musician character.

The sequel song revisits Jimmie 20 years later appearing as a guest on a “What’s My Line?” style show. There’s a lot of wordplay here, not least in the title where “lime” refers to both the building material and the Lime Grove address of the BBC studio where the song’s events take place.

I can only think of 2 song titles that qualify here and both of them are big favourites!

I love “Black and White World” especially the Beatles-y demo version from the “10 Bloody Marys and 10 How’s Your Fathers” album (the first Costello album I bought!) That album was a round-up of non-album tracks and b-sides, as was a later compilation “Out Of Our Idiot” which is where I first heard “Black Sails In The Sunset.” Originally released as the b-side to “Tokyo Storm Warning,” the live version from the Costello Nieve boxset is pretty special too.

There’s “Black and White World” of course but that’s already been discussed above. I’m not much of a fan of “Wave A White Flag,” a very early song that was included on re-issues of “My Aim Is True.” It’s a jolly little number about domestic violence and whilst it includes some good lyrics, the music is a bit too derivative for my tastes.

I much prefer a later song that also addresses some similar lyrical themes is “White Knuckles.” This is an absolute gem of a song from 1981’s “Trust” album. You won’t find many songs that Elvis has played live as infrequently as this one which is surprising because because the melody, the arrangement and the Attractions’ performance are all fantastic. 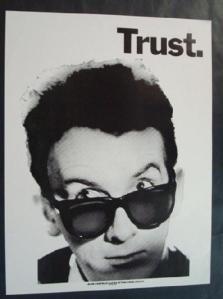 A few years ago, producer T-Bone Burnett was given a load of unused handwritten Bob Dylan lyrics and with Dylan’s blessing he rounded up a posse to write new music for these words and record them. Inevitably given their long-standing friendship, Elvis was one of the first people Burnett called. The resulting double album “Lost On The River: The New Basement Tapes” is, perhaps unavoidably, a little bit of a disappointment given the backstory and the calibre of talent present.

The best of the Costello songs is “Golden Tom Silver Judas.” Musically it reminds me more of “John Wesley Harding” or “Nashville Skyline” than “The Basement Tapes.”

But actually my 2 favourite songs on the album aren’t ones that Elvis sings. 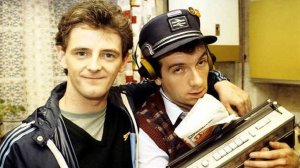 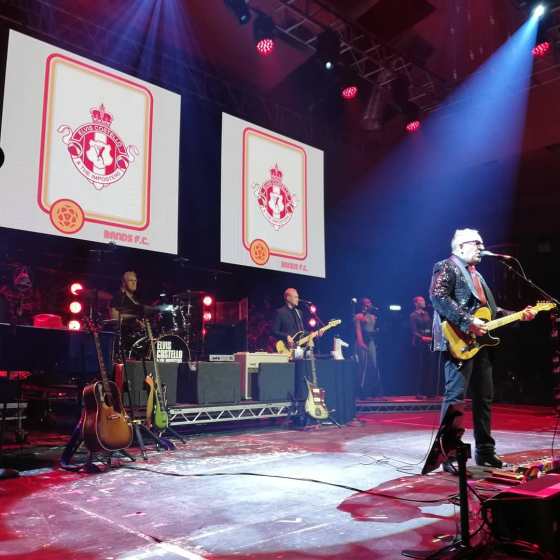 Elvis also wrote the music for 2 later Alan Bleasdale series on Channel 4, GBH and Jake’s Progress which are both still available to watch on All4.

Before “Watching The Detectives” became a hit in 1977, Elvis released 3 singles earlier that year that didn’t trouble the chart compilers. The third of those was “(The Angels Wanna Wear My) Red Shoes” a brilliant song rather let down by a rather thin and weedy sounding band/production. Many would consider it sacrilegious to slate off that much-acclaimed debut album but I have always thought it would be a much better album if it had had been played by The Attractions. So rather than the original version, I’ve included the Live At The Hollywood High version in the playlist.

“Red Cotton” is one of ten songs Elvis wrote for a chamber opera about the singer Jenny Lind and two of her high profile acquaintances P.T. Barnum and Hans Christian Anderson, four of which ended up being released on 2009’s acoustic Americana album “Secret Profane and Sugarcane.” The lyric doesn’t pull any punches on the subject of slavery as it travels to Benin, Liverpool and Barnum’s travelling show in the New World.

Veering across the spectrum from Red brings us to “The Scarlet Tide” co-written with the aforementioned T-Bone Burnett. A beautiful piano-led version by Alison Krauss was used in the soundtrack to the epic Civil War film Cold Mountain.

The following year Elvis released his own version as the closing track on “The Delivery Man.” Like many of the album’s best songs, this one features a harmony vocal from the peerless Emmylou Harris.  The Imposters are in outstanding form throughout the rest of the album but they aren’t playing on this song. With its sparse acoustic arrangement it may have been a better fit on the “Secret Profane and Sugarcane” album discussed above. 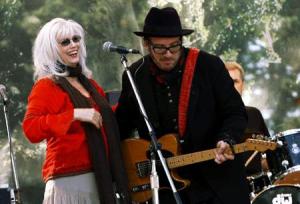 The singer Arthur Alexander is best known for having his song “Anna (Go To Him)” covered by The Beatles on their first album.  After he died in 1993, a tribute album called “Adios Amigo” was released. It’s got some great stuff on it and I’d particularly recommend the Nick Lowe, John Prine and Frank Black songs.

Incidentally the same song was covered by Bob Dylan on his “Down In The Groove” album. Definitely not one of his most acclaimed albums but I have a bit of a soft spot for it. Admittedly quite a lot of it is Dylan playing half-arsed covers of old rock’n’roll tunes which nobody needs to hear. But there is also “Death Is Not The End” as covered by Nick Cave, Shane McGowan, Kylie Minogue et al for the jolly closing number of the “Murder Ballads” LP and a very silly and probably offensive number called “Ugliest Girl In The World” that my teenage band used to cover.

This is the big one. Elvis has recorded more songs with “blue” in the title than all the other colours added together. He’s also used that word in 3 of his album titles “Almost Blue” “Deep Dead Blue” and “My Flame Burns Blue.” So here are a few of my favourites.

Confusingly, the song “Almost Blue” does not appear on the album of that name. (See also “Imperial Bedroom”)

Originally written with the jazz trumpeter Chet Baker in mind and later recorded by him, Elvis tells that story well in this interview and even better in his book. The Baker version is not on Spotify so I’ve included Everything But The Girl’s brilliant cover instead.

“Upon A Veil Of Midnight Blue” was also written for someone else but its intended performer Charles Brown changed most of the lyrics and re-titled it “I Wonder How She Knows.” Elvis eventually released his own version on the orchestral live album “My Flame Burns Blue.” But my favourite version is from a different live album, Mary Coughlan’s “Love For Sale” recorded in 1993 at the much-missed Mean Fiddler in Harlesden.

On the day that album was released in 2002, I saw Elvis & The Imposters at another much-missed London venue The Astoria and they opened the gig with it. It’s not on Spotify so there’s a YouTube clip below.

In the summer of 1995 Elvis curated the Meltdown festival at the Royal Festival Hall and performed alongside many different musicians. One of those was Bill Frisell and just a few weeks later some of that evening’s performance was released as Elvis’s first ever live album. The final track and album itself were both titled “Deep Dead Blue,” a new song co-written with Frisell. As well as another inventive and unpredictable melody, I really like the lyrics here. My interpretation is that they are about accepting and embracing sadness. In other words being “Glad to be Unhappy” to quote the title of a Rodgers and Hart song Elvis performed later that week.

That live version is not on Spotify so instead I’ve included a version from Bill Frisell’s most recent album “Harmony” where it is sung by the multi-talented Petra Haden. She once recorded an acapella version of the entire “The Who Sell Out” album!

My other favourite “blue” song was originally recorded during the “King of America” sessions but left off that album and released later as a standalone single.

I’m not that keen on that version of “Blue Chair” but thankfully Elvis had another crack at it when recording “Blood and Chocolate” with The Attractions. That version is amazing and right up there with the very best songs on one of Elvis’ very best albums. An absolute masterpiece.

The keen-eared amongst you may notice that the “oh oh oh oh oh oh” bit at 2:15 is lifted note-for-note from The Beatles version of “Anna (Go To Him)” mentioned above.

No officially released version exists but on his solo acoustic tours in the mid-80s Elvis often used to play a cover “Pretty In Pink” by The Psychedelic Furs.

There are no oranges or yellows on the Costello palette. No purple either apart from a couple of verses of “Purple Rain” that occasionally appeared in the encore of some Spinning Songbook shows.