This is my 4th blog post of Elvis Costello gig memories, you can read part 1 right here , part 2 here and part 3 here.

This was a charity gig where Elvis shared the stage with Nanci Griffith, Emmylou Harris, Steve Earle & John Prine. I was already very familiar with the music of Nanci, Steve & Emmylou and I’d seen those first two live quite a few times already. But the star of the night turned out to be John Prine. Before this gig, the name John Prine was only known to me from other people’s covers of his songs, in particular “Hello in There” by 10,000 Maniacs and 2 quite different versions of “Speed to the Sound of Loneliness” by Nanci Griffith and Alabama 3. But John’s storytelling and personality stole the show on this night. One of the main highlights of the evening was his song “The Other Side of Town” which we played and discussed on podcast number 6.

My ticket. It says London Apollo here but I’m still calling it the Hammersmith Odeon because I’m old school (or maybe just old?)

Each of the performers was armed with an acoustic guitar and they took their turns to play a song, much like the BBC Four show “Songwriters Circle” or the Kris Kristoffersen episode of Elvis’ “Spectacle” show. 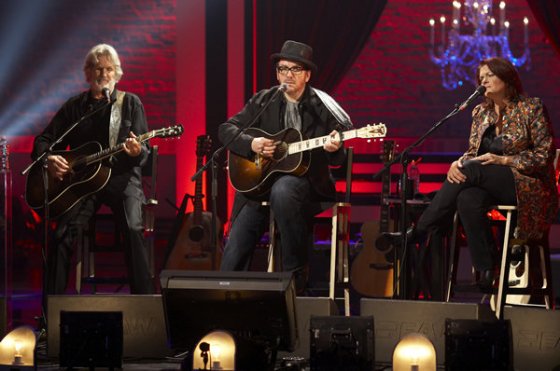 As for Elvis, he gave another airing to that unreleased Alibi song that I was a big fan of. He also played an unexpected cover of “Please”, an underappreciated song from U2’s much-maligned “Pop” album (best heard on the live in Rotterdam version)

It was a very enjoyable gig but I was a little disappointed that there wasn’t all that much collaboration onstage. Just like they did on the Gram Parsons tribute album, Elvis & Emmylou duetted beautifully on the Everly Brothers’ song “Sleepless Nights” but apart from that it was mostly solo performances. Emmylou Harris has got to be one of the greatest harmony singers in the world and it would’ve been great to hear a lot more of the performers joining in with each other’s songs. 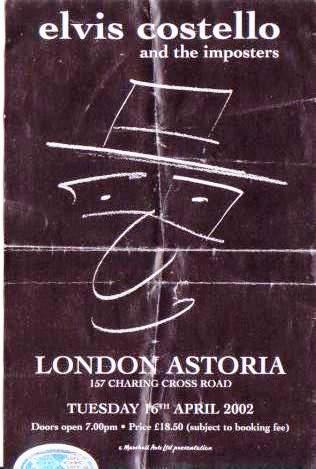 Another gem from my ticket collection. I’m really interesting at parties.

Early in our relationship, me and the now Mrs Garbanzo had established a rule that “you can never listen to too much Elvis Costello.” A dozen years of living with me later, she may no longer completely agree with that particular maxim but back in 2001 she was still very much onboard with it. So Elvis’ first album with The Imposters was released on this day and that afternoon Mrs G had been along to the Virgin Megastore to get a signed CD and see them play a few songs. We’d actually already had a copy of the album for a few weeks thanks to a friend of a friend in “the business”.

Good job too because the “When I Was Cruel” songs dominated the setlist at the Astoria which opened with one of my favourites “My Little Blue Window”.

This was the first tour under the banner of “Elvis Costello & The Imposters” and new boy Davey Farragher showed he had the skills to fill Bruce Thomas’ boots with well-loved oldies like “I Don’t Want To Go To Chelsea” and “Lipstick Vogue”. It’s often a bit weird watching a gig when an original member has left a band. I saw The Who at Wembley Arena with Zak Starkey playing in place of Keith Moon but the other 3 guys all there. Now that John’s gone and they’ve gone from being 75% to 50% I have no interest in seeing them again. More recently, I’ve taken the decision not to buy a ticket for The Specials without Jerry Dammers and said “no Deal” to going to see Pixies with a different Kim on bass. 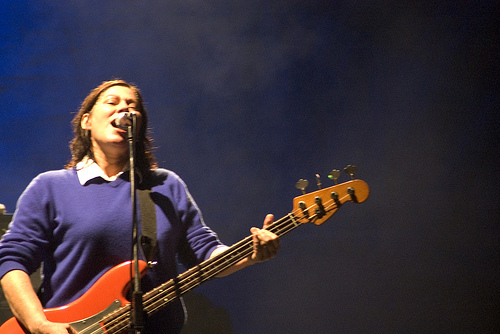 I think if it had been Pete Thomas or Steve Nieve who had left The Attractions / The Imposters then that would’ve felt like it wasn’t quite the same. As well as being outstanding musicians, both those two give the impression that they’re really an integral part of the team and they’re enjoying playing Elvis’ songs. Most of the time, Pete’s singing along. Maybe it was just in my imagination, but Bruce always seemed to be slightly distant from the rest of the band, in his own world onstage lost in his playing.

Davey’s certainly not like that. He appears to be much more enthusiastic onstage. On some of the “When I Was Cruel” songs like “Dust” and “15 Petals” as well as later songs like “Bedlam”, he shows his versatility as a bit more of a “groove” player than Bruce.

Going back to the Astoria show, it was a really good one but I remember being a bit disappointed that, in comparison to the usual lengthy Elvis gig, this one seemed a bit brief.

Or “Chorizo Goes To Monte Carlo” for definitely the weirdest Costello gig I’ve ever been to!

The Mrs and me had a holiday to Italy booked taking in the sights of Rome, Pisa and Florence by train. But when we found out that Elvis was playing a gig on his birthday, we added Monaco to our itinerary.

Before we left, we tried to book some accommodation and it seemed to be quite a battle to find an affordable place to stay and that was our first clue that Monte Carlo might not be the ideal place for backpacking travellers on a tight budget!

My birthday is also in late August so as a treat, Mrs Garbanzo paid for us to arrive in style flying into Monte Carlo on a helicopter from Nice! Nice!

I arrived at the gig dressed appropriately for a scruffy bloke on holiday only to be told that I had to wear a jacket to get in to the casino. After a brief panic, they told me that they could lend me one so I put on a jacket about 4 sizes too big and we were led to our seats where I immediately removed it again. Just like most dress codes, this one was completely fucking pointless.

It was becoming very apparent that this place was a far cry from any gig venue we’d been to before. We were in a big round dining room full of long tables populated by the super-rich. There was an absolutely appalling cabaret band onstage and most of the punters were just there to pose and have an expensive meal in a fancypants setting. They certainly weren’t there to see Elvis. 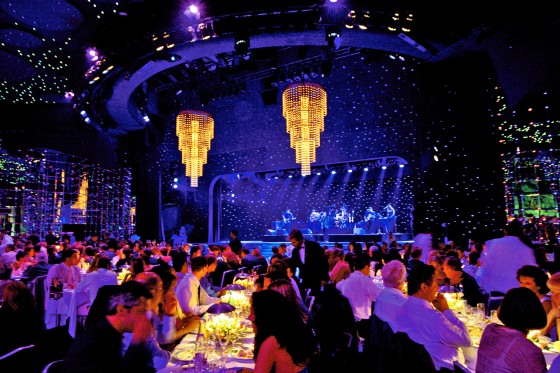 It’s a mighty long way down rock’n’roll from the Hope & Anchor to the Salle Des Etoiles.

Mrs Garbanzo found a drinks menu and we were both freaked out to see the cheapest drink on there cost nearly 30 quid! So we ordered a couple of soft drinks which we made last the whole evening.

The godawful cabaret band announced that Julian Lennon was in the building and proceeded to play a dreadful cheesy version of “Imagine”, quite possibly the least appropriate possible song for such an opulent location. As Elvis once sung “was it a millionaire who said imagine no possessions?”

Thankfully, Elvis & the boys were on soon after, opening up with the classic “Miracle Man” which they played whilst the stage was moving forwards into the crowd. Oh yes.

Later on in the gig, we sang Happy Birthday to Elvis and the roof retracted which explained why this part of the casino building was called Salle Des Etoiles.

Just like the Astoria gig above, it wasn’t a very long set but it was certainly a memorable one. 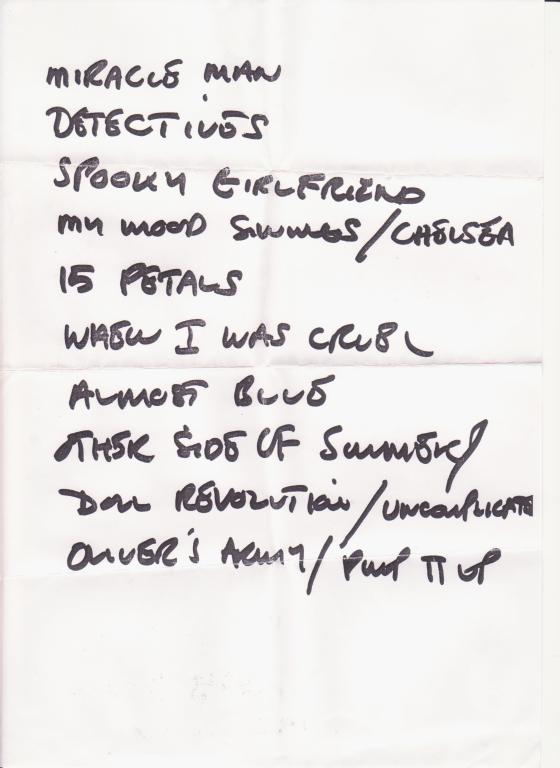 One last thing to mention which was the toilet. I’ve been to Japan a couple of times and seen some toilets than can perform unusual tasks but I’d never seen a self-cleaning toilet like the one in this casino. When you flushed it, the seat and bowl rotated a full 360 degrees going through a kind of miniature brushing car wash device. It must be reassuring for the elite society of Europe to know that they can safely sit on a public lav without having to worry about getting traces of piss from some jacketless prole like me on their immaculate and very rich arse cheeks.