Most years I manage to get to around 20 gigs. This year I’ve more than doubled that ending up on 42, a number that’ll please any Douglas Adams or Mozart fans reading this. Actually it’s even more than that because I’ve not included any of the bands I’ve seen sharing the bill at my band’s gigs.

It’s been great fun and I’ve enjoyed them all so it seemed pretty pointless to try and rank them. Instead I’ll just list them in chronological order with a selection of not particularly good photos.

Just found this video on my phone. @sleafordmods doing "Stick In A Five And Go" at their Chester gig last April. pic.twitter.com/zpuKGVuFCz

The Wedding Present @ The Live Rooms Chester May 2019

The Burning Hell / Quiet Marauder / My Name Is Ian / The Vanity Project @ The Deaf Institute, Manchester 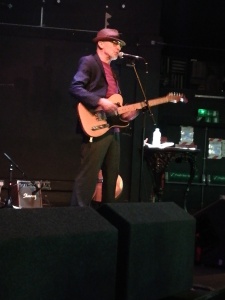 Exactly half the gigs (21) were in Manchester or Salford. There were 7 in Chester (not bad for a city that doesn’t have much of a gig scene) and 6 in Liverpool. The closure of the much-missed Central Station in Wrexham meant that I saw only 2 gigs in Wales this year.

Sorry to say that one of those friends sadly passed on before the year was through so this one goes out to her.