One email was sent, with one video of a strange song about a plastic fox in a garden, and that was enough to lure Chorizo Garbanzo, Rebel Rikkit and Toyota Jim to Parr Hall to see the Mik Artistik’s Ego Trip. Well, that, and an endorsement from Dr Cooper Clarke (you don’t see many of those around).

After a deep analysis of boyhood toy envy to resolve whether a Grifter was better than a Chopper and whether a Chipper was better than a Raleigh Power Drive, and was it indeed social death for a 10 year old boy to be gifted a ‘girls’ bike, it was time to explore the newly developed Parr Hall, which had gone all Hacienda Club on us with stark urban greys and plain wood finishes more Amsterdam than Warrington! 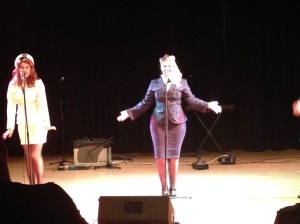 First up were The Nylon Hearts, a vocal trio singing Boogie Woogie with a bit of northern verve and cheek. They kept the harmonies tight and were not afraid to call the crowd a “bunch of pervs”.

This was, however, not a precursor to what was to follow, for a very different trio adorned the performance space thereafter as Mik Artistik’s Ego Trip was launched on an unsuspecting audience. It’s hard to describe Mik without the ability to glare manically into your eyes (because that’s what he would have wanted). 60 years old, wearing a soiled Lab Technician’s white coat, a flat cap with a single red bobble on the front, absent mindedly singing into his maraca, he cuts an unlikely musical shaman, yet over the next 2 hours that’s exactly what he became. 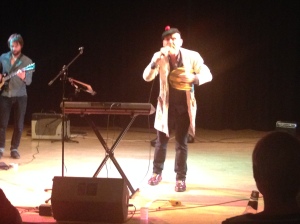 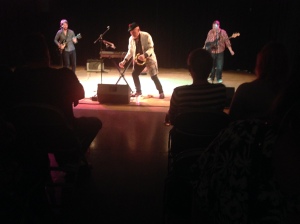 Mik delivers this madness with a swagger and spontaneity that is hard to keep up with. As a lady in a pink dress walks by, he launches into the riff “Lady in a pink top goes to the lavatory, hope she doesn’t know that I just want her to pee on me”. His ability to improvise was assisted by the requirement for anyone wanting the toilet having to do a walk of shame past the stage to be the next victim of Mik’s razor sharp wit.

The knock-about humour was served with many raw slices of musings on love and regret and the realisation that it’s not about fame, it’s not about money, it’s about getting together and communicating and having a party in the knowledge that real transcendence can be found in a pair of Adidas Sambas. Come on everyone, let’s buy some towels!

Did I mention he and the rest of the them could really sing? That’s probably important to note.