As Sly Stone sang, it’s a family affair for the Wizards this evening. All 3 Wizards were at the gig and so were all 3 of the Mrs Wizardses. Rebel Rikkit even brought a long a couple of Junior Rikkits for the occasion.

Before the gig, we were busy Tweeting what songs we wanted to see up on the wheel.

Quite a few of those were played, nearly all of them in fact. The only request we had that was on the wheel but didn’t get played was “Alibi”.

We’re not going to write a full review of this gig because there’s just too much to say really. We were all too busy watching the gig to make any notes so we can’t even give you the full setlist! Instead we’re just going to give you a couple of bullet-pointed lists. Who doesn’t love a bullet-pointed list, eh?

The Showbusiness Marvel of the Age

So here are some of the things we particularly enjoyed:

There were also some things that we had different opinions on:

On the way out, a crew member was on stage clearing up and he threw a few cups into the crowd. Chorizo was lucky enough to catch one so he’s made up about that. There’s only one thing the Wizards like more than gig merch and that’s FREE gig merch. 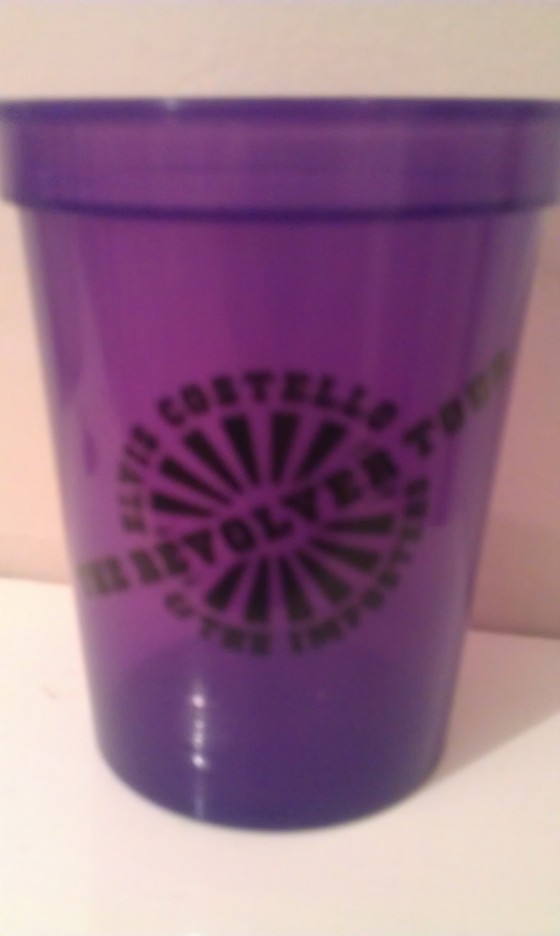 Two of the Wizards, Chorizo and Rebel, are currently blogging on this site about their various live Costello experiences over the years. See links below and come back soon for further chapters.

Hey! Im Lennyricket. Before you start saying how rude i am, i am 13 years of age. And this id my review of the Elvis Costello concert which was on monday the 7th of june.

Lets start by the positive.. Well, this will be a short paragraph .. We were sat in the stands on row K. The veiw was really good. Especially the big wheel, i mainly enjoyed watching a load of middle aged women dancing in s small cage. That was fairly amusing. My fraviote elvis Costello song is Alison. But he never sang it … Dam you

I am not a big lover of the wizards music. As im more of a acoustic  lover for exsample like Justin bieber,ed sheeran,taylor swift. But i also like a bit more lively music like david gutte, demi lavato also bands the Janoskians, little mix, one direction are also my good fravoites. Im more of a melody person and i enjoy listening to music from this centery not from the 80s. I also mainly enjoy good music not old singing like they are teenagers singing about pretty women wanting them all the time. Im not saying that the elivs costello concert was all that but he did seam all. Girl your beautiful and stuff like that…

I was also amused by the old middled aged men wearing hipster glasses (google it) and wearing trilby hats. I actually thought i saw my english teacher there until i realiserd she didnt have a funny thing on her thinger as she fratcherd it the week before. which my english teacher did. She was very insulted when she asked was she gorgouse and i replied no… Woops

The night was a blast he had about four groups of people up on stage i did think i would think he would of had more, that i was disappointed in.
I would recommend this to all you costello fans out there!!! Especially if your like rebel who i had a great earful of him saying ‘wasn’t that amazing!!’  I just nodded :))
Hope you enjoyed my review hopfully it didnt depresse you too much! But thats it from me good bye s
Lenny ricket!
trust the wizards here we go–>