There aren’t many musical events that could have brought our Kicker out of a self-imposed podcast retirement, but the news that one of his favourite bands had not only re-recorded a selection of their back catalogue with a certain Steve Albini at the producer’s helm, but were also letting a select few hear these tracks ahead of official release has seen the cobwebs blown off this particular sleeping giant. Ahem.

And so it is that he joins forces with Rebel Rikkit to bring you a mini-podcast celebrating the wonderful Spare Snare featuring an exclusive play of the re-recorded classic, Super Slinky, from their forthcoming Sounds LP alongside a few of his other favourites . 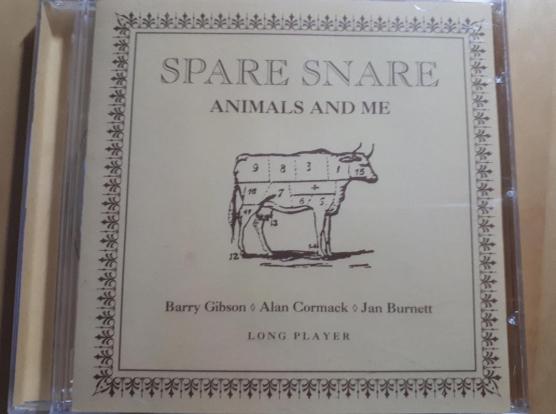 Spare Snare, from Dundee, Scotland, celebrated 25 years of releasing records by asking Albini if he would co-host a Scottish Engineers’ Workshop with the band, and record Spare Snare for the rest of that week. A resounding ‘YES’ was returned and funding was secured from Creative Scotland to host the workshop and record the album.

The band chose to record 10 classic Snare tracks from the catalogue that have evolved with playing live, or would suit Albini’s sound. These Albini recordings have become one of the highlights for the band, sitting nicely next to their four John Peel Sessions.

Gideon Coe at BBC6 Music and Vic Galloway of BBC Scotland have been supporting the release and playing exclusives from the album.

Excitingly, the album will only be available on 180g vinyl and has been specifically mastered and cut with the word ‘audiophile’ (and the wizard, Kicker of Elves) in mind. It will also come with a download code for the likes of Chorizo Garbanzo.

Recorded on 2 inch tape, and mixed onto half inch tape by Albini, the album was then mastered and cut by mastering legend Pete Norman. It has been pressed at the mighty Optimal plant in Germany.

The vinyl will come, polylined, in a brown reverse card spined sleeve, with a one colour print.

The band wishes to support the shops they shop in themselves (and break the bank of Kicker of Elves), and have various coloured variants available. Collect ’em all!!

You can see their new film for the track ‘Grow’ here:
And check out Jan’s moves to ‘I Am God’ here:
Here’s another taster from the album:

Spare Snare live: the band have a confirmed live show at the Leith Depot, Edinburgh on Saturday 18th August, there will be an Edinburgh instore during that day too.

There is also another Scottish date being announced for October and in the New Year, the band will be playing this festival and hopefully elsewhere in England.

The last time they played Liverpool for us, they sounded like this:

Read our Q&A with the band here.

Kicker of Elves’ A to Z of Spare Snare: