You have to look a long way down the list of famous musical towns before you get to Northwich. The town’s sole representatives in the annals of musical history are The Charlatans. Singer Tim Burgess is from nearby Moulton, the band initially met there in Omega record shop (Spinal Tap: “don’t look for it, it’s not there anymore”) and a photo of the cafe on Witton Street was used on the cover of the compilation Melting Pot. 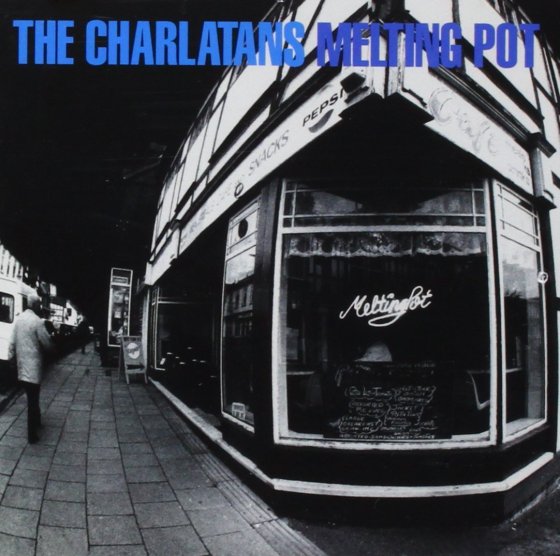 They returned to CW9 for a week of gigs at Memorial Court, a building that hosted some legendary gigs in the distant past. The Beatles played here 6 times, but these days it is mainly used as a leisure centre (the water slides are ace!)

Along with their own gigs, the band put on a whole load of other events around the town creating a kind of mini Fringe. I live just a few miles from Northwich and whilst the town has a decent live music scene for covers bands and open mic nights, there are no venues whatsoever that put on “proper” gigs. In the 6 years I’ve lived round here there has not been a single gig I’ve wanted to go to. Until tonight when, like the metaphorical buses, 3 came along at the same time!

With people travelling from all over the world to be here, I decided not to even try to get tickets for The Charlatans gig. Better to let one of the band’s true devotees go to that than a casual fan like me. Indie legends The BMX Bandits were playing at The Salty Dog but I opted to get a ticket the Gladstone Club where a whole load of up-and-coming bands were playing.

The Gladstone Club is an old school Phoenix Nights-style club complete with silvery tinsel curtain at the back of the stage. I’ve played gigs here myself and also at the Wings ex-serviceman’s Club over the road and our covers of Buddy, Chuck, Elvis, The Big O etc went down very well with an audience old enough to remember those songs the first time around. Unsurprisingly none of that crowd were here tonight.

First up were The Delights. Most of their songs were propelled along very well by some great bass lines played high up on the neck. Peter Hook would approve, even if he might object to the bass being held high up on the chest, the very antithesis of Hook’s low-slung style. Really enjoyed the instrumental track, reminiscent of one of the funkier tracks from The Stone Roses’ unfairly derided Second Coming, an album these boys are definitely too young to remember. The rest of their songs made good use of distorted guitar sounds. They would’ve been even better with the vocals a bit louder in the mix but definitely ones to watch out for.

The Delights at The Gladstone Club Northwich 18th May 2018

Next up were Paper Buoys. Beards all round here, except for the drummer who possibly has the surname Beard. The singer played some abrasive trebly Black Francis style rhythm guitar on most tracks and their songs, especially the faster ones, are tuneful and memorable. They played a cover of “Folsom Prison Blues” which made me smile when I realised I’ve covered the same song on that same stage! The cutting guitars and energetic rhythm section were reminiscent of the brilliant Future of the Left at times, but they also have some more instantly accessible songs like “Headshot” and the anthemic set-closer “Wasted.” 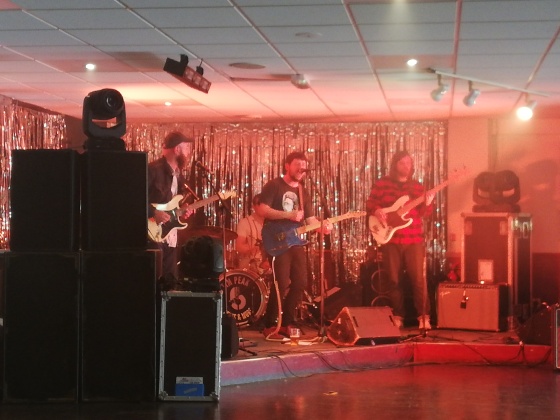 Paper Buoys at The Gladstone Club Northwich 18th May 2018

Now on to the main reason I wanted to come to this gig. Duck, you suckers, here come The 99 Degree. We played their song “Dead or Alive” on our podcast number 67 back in 2016 and I’ve been keeping an eye on their social media channels ever since trying to find an opportunity to catch them live.

Not quite sure how a bunch of lads from Manchester end up writing songs about the good, the bad and the ugly Wild West but the fact that they do keeps this lovin’ brother happy. The songs are dominated by the twangy lead guitar lines played on guitarist Phil’s Gretsch that looks and sounds both big and beautiful. Ry Cooder in a Mexican standoff with Dick Dale and Ennio Morricone. Hawaiian shirted singer Joe has a touch of Shaun Ryder in his half-sung half-spoken delivery, occasionally a bit of Birthday Party era Nick Cave as well. They opened with “Losing My Mind” from their recent Boot Hill Surf Club EP, catchy with a brilliant guitar solo. Joe stepped off the stage and prowled the dancefloor giving the stories all the drama and menace they deserve.

The highlight for me was an as yet unrecorded song called “Bed of Bones” but the whole show was great, pity there weren’t more people here to see and hear them. Their “Boot Hill Surf Club” EP was being given out after the gig for free but I think it’s easily good enough to be sold for a few dollars more.

At this point my faithful compadre The Lancashire Toreador and I were in need of some food so unfortunately we missed the next couple of bands.

We returned as another band were setting up and noticing the singer’s choice of trouser we came to the conclusion that white jeans should only ever be worn if both the following conditions are met: a) it is 1977 b) you are Mick Jones.

But we felt bad for our mild piss-taking once we heard him sing. Fucking hell, what a voice. A powerful force with a great falsetto, a bit Tim Booth, a bit Morrissey, a bit Billy Mackenzie. William, this is really something. The band are called Circus Wolves and it’s by no means all about the vocals, the band are exceptional too. More good beardage and shirts on display here. Does anyone else remember mid-90s Suede labelmates Geneva? They’re like a louder and more aggressive version of that. Currently they have just 3 songs on Spotify but all 3 of them are excellent.

Circus Wolves at The Gladstone Club Northwich 18th May 2018

Last band of the night were Control of the Going. They looked great but sorry to say neither me or The Lancashire Toreador found them particularly engaging. A bit too Controlled, not enough to get us Going. Their songs just seemed to be a bit too predictable and indie-rock-by-numbers to our ears. Having said that, they got probably the best reception of all the bands on so what do we know?

Even so a great evening’s entertainment with 3 bands in particular (Paper Buoys, The 99 Degree, Circus Wolves) worth the price of admission by themselves.

Have a listen for yourself on this playlist.

The following morning I came back into town to go to the “Vinyl Adventures” record fair in the Plaza bingo hall. I’ve walked past here many times but never been inside. Don’t think this building is used for anything these days, not even bingo. This is a tragedy because it’s a beautiful art deco building with a big stage. Unfortunately I was here too late to catch Tony “Longfella” Walsh. His brilliant poetry was a highlight of the Bob Dylan 50th anniversary concert I went to a couple of years ago and since then his poem “This Is The Place” went viral in the wake of last year’s Ariana Grande bomb attack.

I don’t currently have a working record player so I’ve temporarily banned myself from buying any vinyl priced over a quid. CDs only for me today and nobody’s buying them these days, so I’m not going to end up paying silly money for anything. Picked up some bargains including a couple of CDs from the lovely folk from The Reckless Yes label. 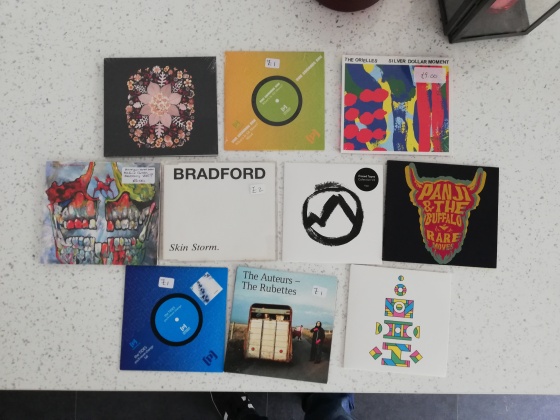 I also saw a vinyl copy of “Johnny Cash At San Quentin” selling for 100 quid! Taking the piss, surely? When I was a kid, everyone’s dad had that album so how can that possibly be a rare record?

Next I walked down to see the Charlatans exhibition in Barons Quay. There were an interesting selection of old diaries, flyers, posters and even instruments on display there and just like at the record fair, lots of interesting people and fellow music obsessives to chat with.

Hats off to The Charlatans for organising an event like this.

There’s usually so little going on in Northwich that seeing the likes of Mark Radcliffe and Norman Blake around town is quite a shock. See the same faces at a gig in Manchester and you wouldn’t even bat an eyelid! We saw John Robb at the train station but then again that’s not that surprising because he seems to pop up at pretty much every gig I go to! Stop stalking me John!

Is it too optimistic to think that this might herald the start of a new era of live music for the town? Probably yes but although there were definitely many people visiting Northwich from far away places this week, the huge majority of people I spoke to were fairly local. I spoke to music fans from Crewe, Helsby, Middlewich, Tarvin, Macclesfield, Congleton, Warrington and Knutsford. I’m sure that, like me, these people regularly travel to Liverpool and Manchester to see gigs, sometimes also to Wrexham, Preston, Stoke, Leeds, Birmingham, Holmfirth etc.

We’ve seen this week that are several really good venues right here in Cheshire that aren’t being used for much. Now that people have seen what can be done with these venues maybe some promoters will start putting on more quality live music around here. There’s certainly an audience for it. If you build it, they will come.

P.S. since initially writing this, it has been pointed out to me that The Charlatans are not the only musicians of note to come from Northwich. It turns out that Rupert Holmes was also born in the town. What do you mean, who’s Rupert Holmes? He’s the man responsible for “Escape” a.k.a. “The Pina Colada Song.” That song is either the very worst or the very best lyric of in the entire history of popular music. I’ve never quite been able to decide which.

More of our gig reviews can be found here and here.