Two of the Wizards from this site were right down the front of the pit and they will be posting their podcast review of the show on here very shortly, no doubt featuring tales of queueing derring do and being touched by the hand of Bruce.

In the meantime, here is my review from further back on the pitch.

I had to work yesterday so I couldn’t join in the fun in the pit queue with the other Wizards. But fortunately The Boss (at my work) is a big fan of The Boss so she let me finish work early to make my way down to Coventry. All was going well and by 3 o’clock I was at Stafford services and feeling confident that I would easily get there and parked up in time for the stadium doors opening at 4:30.

But the best laid plans and all that. Leaving the services, I found that the highway was jammed with broken heroes! Well, not quite but the southbound M6 was jammed with a broken-down lorry so I found myself turning off the motorway into unknown territory (no road map, no sat nav) going through some places I don’t even know how to pronounce (Rugeley? Lichfield?)

It was slow progress all the way and very frustrating. I began to doubt I would even make the 7pm start. Naturally I had Bruce on the car stereo, but even that wasn’t providing me with much comfort. When I was stuck in stationary traffic somewhere near Tamworth and he sang “Someday we’ll look back on this and it will all seem funny” that really didn’t help. Things actually got so bad that at one point I actually TURNED OFF THE MUSIC! Unbelievable but true.

To cut a rather dull travelling anecdote short, when I got near the ground the traffic wasn’t moving there either so I just dumped the car in a layby and ran about 3 miles to the stadium. I was sweating more than Bruce himself! Got on the pitch, paid £4.50 for 1 pint and then the show started. Good timing Bruce, thanks for waiting for me! Nobody wins unless everybody wins!

At this point, I could just go through the setlist talking about every fantastic moment (see full setlist with videos & pictures on the marvellous and informative Brucetapes.com) but instead I’ll limit myself to just a few highlights.

My Love Will Not Let You Down

Great song. Mighty Max Weinberg’s drumming was incredible on this. But I was particularly thrilled on behalf of my 2 fellow Wizards because I know that this is a big favourite with both of them and I was happy thinking of how much they would be enjoying that one down the front.

And just as I was thinking that, who did I see on the big screen pogoing with his arms in the air and a big smile on his face, our very own Rebel Rikkit. It was definitely him that time but throughout the gig I kept thinking I’d seen him on the screen again only to realise that it was a different person that looked like him. There seems to be a lot of Bruce fans that share Rebel’s look (four-eyed slapheads)

Wow! Played for someone in the crowd with a sign requesting it for their newborn kid Ruben. One of my absolute favourites and a song that really means a lot to me personally. It really resonates, I was welling up in this one.

When he announced that they were going to play the whole album, me and the bloke next to me both instinctively let out very loud big girly screams. We then looked at each other and high-fived. This is particularly remarkable because a) I don’t know this man and b) we’re reserved Englishmen. All the time I was hearing the album live, I was obviously loving it but at the same time, a little excited voice in my head kept shouting “THEY’RE GOING TO PLAY JUNGLELAND SOON!!”

All of the album was amazing of course but especially Backstreets and of course, Jungleland. Jake Clemons played it just note perfect and I was welling up again. But I’ve always thought that the real unsung hero of the Born to Run album is piano player extraordinaire Roy Bittan and for me he stole this part of the show. That man is a marvel.

When they finished the album, a bloke near me shouted out “Now play all of Darkness!”

He did play pretty much the same songs off Wrecking Ball that he played last time I saw him (Manchester, 22nd June 2012). But why complain when those songs are as great live as We Are Alive, Wrecking Ball and especially Shackled and Drawn and Death to My Hometown.

Born in the USA triptych

That means 3 songs in a row. Big hitters Born in the USA and Dancing in the Dark with my favourite song on the album Bobby Jean in the middle. More stellar work from Jake Clemons on that one. The Big Man must be very proud. 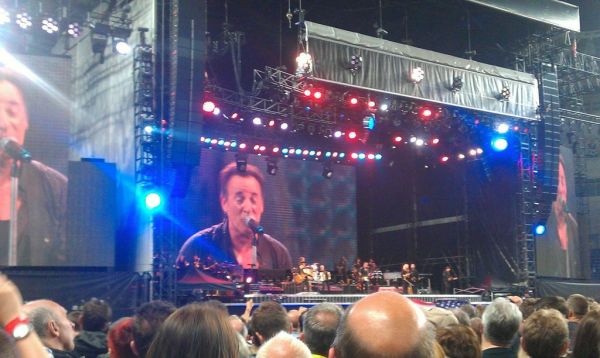 Party anthem! Always loved the version of this on the Live 75-85 box set. It just sounds like the band and crowd are all having a great time. Seeing it live was even better. Great song.

I wonder how many times Bruce says this in a typical gig. When it comes to count-ins, he makes The Ramones look like part-timers.

Lots more I could say but I wanted to keep this fairly short because I haven’t yet heard what the other Wizards have said in their review and I don’t want to just say the same stuff. What a night though! The Ricoh Arena has not seen that much excitement since the days of Dele Adebola!

Bonus moment of the night

The drive home was much more straightforward than the journey down. I was listening to the wonderful Janice Long on Radio 2 and I sent her a text which she read out giving a plug to this very website. That was a particular thrill for me. I love Janice Long because her radio shows made a HUGE impression on my musical tastes as a teenager.  Thanks Janice!

Whilst you’re here, make sure you check out our Bruce podcasts:

And other Bruce-related blog posts: