In anticipation of the upcoming Bruce Springsteen and The E Street Band concert in Coventry, which all the Wizards and supporting cast are attending, we were asked to consider our dream set lists.  Here’s the “Fantasy Setlist” I came up with.
My dream concert goes something like this…
I noticed that Bruce seems to have definite sections of his shows that build on a mood and a theme usually consisting of 4 songs.

The first song group would have one purpose for me: to rock the joint to such an extent that any people in front of me are so exhausted that they will not be able to stop me pushing them aside in order to get to the front myself.  My feeling is that people will get carried away having not expected to be called upon to exert themselves to such an extent at the start of the concert and will therefore flag badly towards the end of the 4th song and I can make my move.  So we start with Seeds, Dollhouse, Restless Nights and Roulette.  Hopefully that will finish them off and, to be fair, it would be great to hear some of the songs of the fantastic Tracks Box Set. 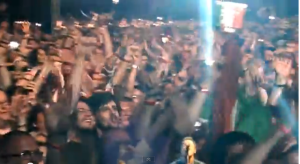 Of course, I will be knackered and so will everyone else so next we need all the slowest songs in the Bruce Cannon namely: Racing In The Street, Drive All Night, Point Blank and Streets of Philadelphia.  This takes the mood right down and as the natural light fades our hearts are lifted and the rarely heard Streets fills the night air. 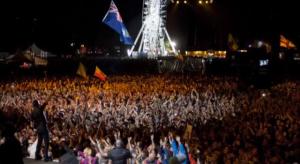 Then Bruce decides that it’s all right playing rock and roll, but this most powerful of mediums must be put to good use. He announces that he is going to change history with the power of song.  He launches into songs that address global tensions: Gypsy Biker, Worlds Apart, Devils Arcade and Swallowed (In The Belly Of The Whale).  This rouses the whole crowd, but we are all surprised at the end of this section when Bruce urges us all to quieten down then he issues a statement about the crisis in the Middle East and proposes a plan whereby all the nations in the area transition peacefully into free democratic states with no violence and no military involvement from the West.  He ends by getting the whole crowd to scream “TESTIFY!!!!” then sing “Yeah………..Yeah…………….”
Just as the statement begins, a small wooden desk is brought onto the stage and Miami Steve is handed a pen and paper to write down what Bruce says and the memo is then paraded to the crowd and put in an envelope and sent to the United Nations to be enacted. 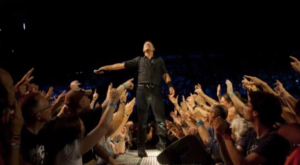 Then it’s party time! 4 songs of dance and celebration: The E Street Shuffle, Sherry Darling, Glory Days and You Can Look (But You Better Not Touch).  With a justified sense of achievement, all of the crowd is dancing, all the stage tricks are on show and about 500 people, including me, are on the stage to dance with the band. 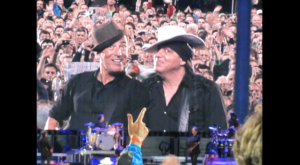 Then Bruce’s mood darkens. There are more problems in the world he says and why would we not use this opportunity to address them?  The band then play 4 songs to highlight the current economic crisis namely: This Depression, Jack Of All Trades, Magic and The Ghost Of Tom Joad.  The small wooden table is again brought out for Miami Steve and Bruce begins another oration.  He analyses the current economic situation and sketches out a plan to implement global rules on trade and taxation that facilitates a balance between public and private activity to guarantee a world free from poverty and disease while enabling entrepreneurs to thrive free from oppressive regulation.  Again he ends with “TESTIFY…YEAH………..YEAH!!!!”  Again the memo is paraded around the crowd and this time sent to the International Monetary Fund and The World Bank to be enacted. 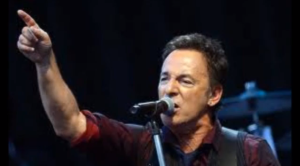 The next section is a remembrance for the fallen band members Clarence and Danny. There are many breaks in the songs as members of the band come forward to tell stories about them.  To be honest it was all too emotional to write about here.  Anyway, they played Spirit In The Night, Shackled and Drawn, My City Of Ruins and My Love Will Not Let You Down. 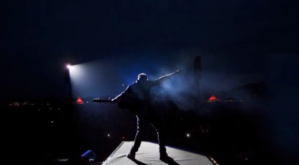 Finally, they play all my favourite songs so we get Rosalita (Come Out Tonight), Thunder Road, The Promised Land, Born To Run and Land Of Hope and Dreams.  During this section, Bruce is passed around the whole crowd, Gary Tallent does a river dance section, Max Weinberg does Gangnam Style, Nils does a rap and Roy Bittan gets his golf driver out and smashes balls containing Bruce’s guitar picks into the crowd. 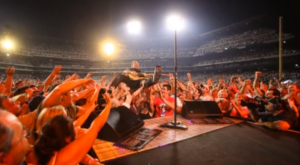 Yes it was quite a night!!!