Podcast 77: I Find That Offensive!

The Wizards turn their attention to offence in music and introduce guidance to assist the more timid amongst us with the “Offenceometer” to warn more fragile souls when adult themes are present. 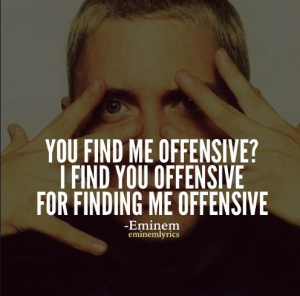 They cover all areas of offence including sex, drugs, violence, language and wonder if those things offend anymore. Yet note that ideas are much more offensive than words. Then in a misguided turn they go in search of the most offensive song ever and make disturbing findings.

To hear this coherently argued thesis (Ed: Steady On!) just click here or the Soundcloud thing down there.

And if you enjoy this kind of thing be sure to check out our Swearing Special podcast from 2013 because it’s fucking great.