Kicker and Chorizo meet up with a couple of other pals in the heart of Liverpool to catch 5 bands play at The Lomax as part of Independent Venue Week. They get to see Mick Flaherty, Michael Conroy, JD Meatyard, (a little bit of) Ste Thompson & The Incidents and venue favourites The Jar Family. 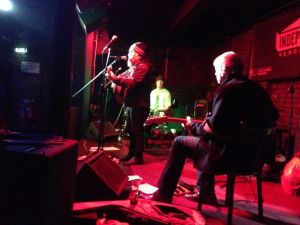 They also catch up with JD Meatyard after his set and he not only puts up with Kicker’s drunken fanboy questions and politely considers Chorizo’s ‘breakfast question’, but also shows he is just as passionate and committed off-stage as he is on. This fascinating interview can be heard amidst the usual blather before and after the gig right here (and there):

Some more pictures from the evening (mostly courtesy of Texas Paul)

mick’s guitar (not really this red) 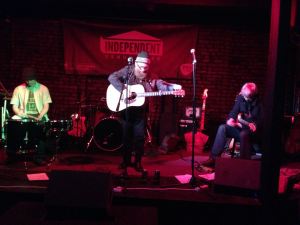 the power of jd 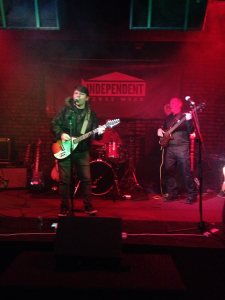 steve thompson and the incidents

we believe in jar

Here are all the released JD Meatyard solo numbers that John played this evening (Olive Tree was omitted live, but I’ve included it because it is great and it was on the setlist) along with the setlist itself that details 4 new numbers and the magnificent Lies Lies & Government, which was performed with freestyle acerbic lyrics. Advertisers? Cunts.

The handwritten note at the bottom reads ‘Yesterday’s Gone’ – was a cover of Mickey Newbury on the cards?