So, there I was, having a barely-earned cup of tea in my favourite mug…

here’s one I made earlier

.. when who should pop into my Inbox – only that Ian Button out of off of the band Papernut Cambridge. Fate, huh? Or possibly just coincidence. Anyway, Ian was getting in touch to highlight me to the fact that the follow up to last year’s cracking covers collection, Nutlets, is out next month.

Presented in the form of 2 x 10″ white vinyl records and a CD (with an alternative mix) in a natty plastic bag, the new album, Love The Things Your Lover Loves, looks fantastic and is a must for the Glasgow Celtic or Hibernian fan in your life. (There’s also a tape version full of instrumentals for all you completists.) 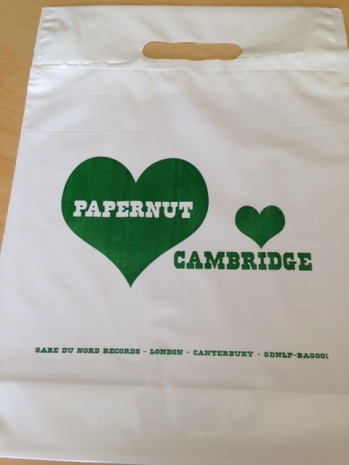 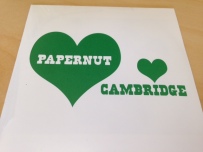 Moreover, this record confirms, if confirmation were indeed needed, that Papernut Cambridge are undoubtedly a supergroup – led by Ian Button, the band also features indie glitterati in the form of Darren Hayman, Robert Halcrow, Robert Rotifer, Hélène Bradley, Emma Winston, Jack Hayter and Ralegh Long – because, as everyone knows, the defining feature of a supergroup is their having a suitably self-referential band anthem. Well, this lot are, as the glorious final track (We Are The Nut) puts it, “the nut, the nut, the paper nut.”

On this, the band’s fourth album, they sound pretty much what you’d expect a group who have recently released a series of cult covers circa 1967-1980 to sound like. However, although there are definite nods to the psychedelic 60s, it’s more a 70s glam feel that dominates proceedings and at times you might just be listening to a Mott The Hoople, or Be Bop Deluxe, for the 21st Century. 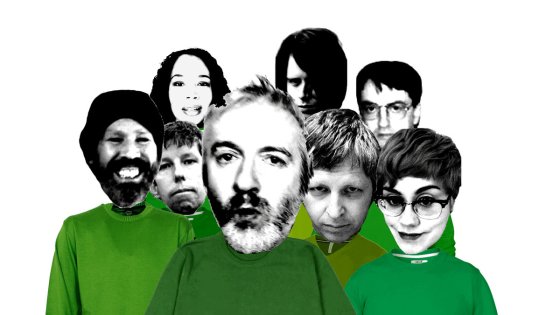 The songs offer up a combination of sagacious relationship advice (Love The Things Your Lover Loves), celebrations of new experiences (Chantreuse) and strange ghost stories (Them), but if there is an all pervading theme, it would be that of communication. One of the stand out tracks, the previously released Mirology, here in pared down form, presents a new form of philosophy, where “all mirologists say / step into tomorrow today” and concludes “the better used communication is mirology”, which, whilst not a little confusing, fits perfectly on a track that manages to conjure up a tremendous Eastern (Asian not Anglian) tinged mystical dreamscape. There won’t be many records released this year that reference the scale used in measuring a civilization’s level of technological advancement, but Karadshev Fail is certainly one. This track has a lovely jazzy opening twinned with some superb drumming from Darren Hayman (a very underrated percussionist) and leads to a song that explores the desire to communicate with the future (at the expense of the present) –  “they think somebody’s out there trying to get in touch” – the title kind of gives the end of the tale away. There are more terrific and peculiar rhythms underpinning the track Spell It Out, which confirms that Papernut Cambridge are more than likely a single entendre type of band, where what you see is what you get and they “don’t always get innuendo” – Ian Button’s lonely harmonica intro is a particular delight here. And of course, what better way to communicate than get your songs on the radio. The song Radio, with its jaunty fuzz guitar and plant pot percussion deserves to do just that.

Possibly the centrepiece of the album is the track I’m Stranded with its country feel (according to the final track, that’ll be Jack Hayter on steel guitar) building a sense of melancholy that, funnily enough, put me in mind of The Replacements Sadly Beautiful. Here there is an admission that they are “closer to the past than to today”, which might just be a justification for the band’s sound perhaps. St Nicholas Vicarage gives us “tea on a Davenport… cakes with the edges caught, Gas Mark 5” and lyrics that flow like nursery rhymes, especially the section “what can the matter be… I wanted to call you but had no battery”, where, for once, the present is brought into stark focus. The line “I don’t want to go back not there ever” must surely relate to a place rather than a time, and so leaves you wondering what might have happened. There’s more mysterious storytelling on Them – a strange tale of outsiders who may or may not be imaginary – “they weren’t doing anything wrong” – and gives us a big twangy guitar solo to boot. There’s definitely a more 60s feel to the track Chartreuse – a Kinksian ode to the best green drink ever (excluding St Patrick’s Day Guinness, obviously), a true story of where “I lived all my days and never thought I’d taste anything like it”. Look out for a joyful monastically/fantastically rhyme too.

Perhaps my two favourite songs bookend the album. The opener Love The Things Your Lover Loves gives us relationship advice Papernut style, where “it’s not an obligation”, but research of potential partners is heartily recommended, and features high quality handclaps throughout. The song also suggests that “keeping things exclusive isn’t good for you”, which made me think of the band as a politically correct Slade. The closing We Are The Nut is a singalong delight and one of those  songs that name checks the players. This is now “a band with a song about itself”, but in typical self-effacing style, they admit “there are quite a few things we’re not interested in”. Nevertheless,  “everybody better look out, cos we’re gonna put another record out” and no doubt it’s going to be a regular play on the jukebox in the Nutflake Social, just as it will be on the turntable in Wizard Towers. Originally named after a band that appeared in a dream, Papernut Cambridge are the real deal, more than simply the sum of their parts, they are a super group and this is a super record.

Kicker’s Key Tracks: Mirology, We Are The Nut, Love The Things Your Lover Loves