Cardiff’s mystical troubadours, Soft Hearted Scientists, rarely play live outside their homeland so when they announced, very quietly, that they would be playing in Sheffield this month there was no doubt that a road trip (albeit on the A57 not the A470) would be a necessity.

This is a band I discovered through the fantastic Whatever Happened To The Soft Hearted Scientists compilation (a record everyone should own not least for the striking artwork), put out by Fruits de Mer Records in 2013, and have been championing ever since.

And so it was that regular contributor to the pod, Texas Paul, and I embarked on a full day of revelry and adventure before finding ourselves at The Lantern Theatre, the oldest theatre in Sheffield no less, deep in residential South Yorkshire. 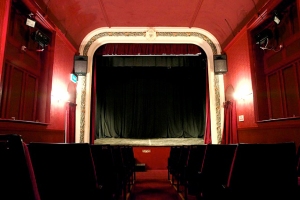 Have a listen below to what we anticipated and then found behind that impressive curtain.

Some photographs from the front row:

The setlist (including a couple of unplayed songs):

This was Kicker’s Dream Setlist (minus a couple of important tracks not on Spotify):

Here are a couple of videos from the gig:

You can also hear where Kicker has banged on about Soft Hearted Scientists before on these links:

Kicker of Elves’ Favourite Things From 2013