Everybody knows Boy George’s story. However, it is a classic. Let’s see, from a guest starring role in the most popular TV show in America to a prison sentence for violent assault and in between drink, drugs, sex and much, much more besides.  If you want the full story, buy one of the books.  But one thing to mention, George was surely the first transvestite to get a number one hit on both sides of the pond. 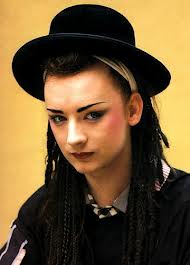 On a personal level, as discussed on the Funeral Podcast, George is the hero of my partner. He spoke to the teenage her and gave her permission to be different and the courage to fight against her circumstances.  She has carried him with her ever since and we have been waiting for a decade for George to rise again. So we snapped up tickets for this gig (a measly £28.50) and hot footed it to the RNCM.  A strange venue for George. I wondered whether his reputation would earn him a big arena gig, but I suppose when you have not been releasing records for 19 years and much of the public last saw you being bundled into a police van, you need to ‘re-engage’ with your audience.  As for me, Boy George was a bit too pop for this punk rocker to appreciate. However, I was as excited as everyone else when the epic Victims video was premièred on The Tube back in the day and I am fascinated to see what George is up to today.

A quick word about the support band, The Featherz, a full on rock and roll 3 piece. They looked great with 2 females out front, one looking like a Pin-ups era Bowie and the other like a Runaway.  They played some great songs and the voices were searing, but the ‘climax’ of “When Did You Last Have Sex” was priceless.

From the first note to the last George was charisma personified and played all the new album for the first hour.  It was clear that the audience was wondering if he still had the voice and the confidence and whether the tunes would stand up.  It was not long before the crowd were reassured that the voice was, if anythin,g stronger than before, certainly more mature, maybe slightly deeper, but really strong and powerful. I was reminded that the core of the Culture Club sound was reggae and this influenced much of the songs. George can skank the life out of tunes and as the dub got deeper and deeper George’s Kingston Carnival rolled on and on sucking us all into its vortex.

Just when we were reeling from the wild echoing of the whoops and brrrrrrs of George’s rastaman antics, the horns were dismissed and good old country music breaks out. The song “Any Road” is a highlight and the beautiful idea that any road will do if you don’t know where you’re going gives us a hug.  The on-stage banter from George was always entertaining as he introduces songs wrongly and bickers with the guitarist John “(John be quiet, I’m speaking.”).

There was a moving tribute to Lou Reed and George explains that when he heard “Walk On The Wild” side he was dancing on clouds because “someone finally gets me”  and the cycle turns around again.

The new album and the covers were aplenty and I don’t think George needed to play the hits, but he seems now so comfortable in himself and his talent and ability that, of course, he didn’t mind playing the hits.  Church Of The Poison Mind was the highlight for me, but Do You Really Want To Hurt Me and a slower reggae version of Karma Chameleon were also excellent with communal singing and dancing breaking out all around the hall.

The last song was a Hari Krishna chant that, as an atheist, I didn’t enjoy.  It’s a corny song in any case, but the idea that someone would join in with a chant for a particular religion seemed odd.  Still, that should not detract from a great night and it did make me wonder if George had maintained this level of creativity and performance for the last 19 years, whether he would have been playing in a football stadium rather than the RNCM in 2013.