I thought I was alone until I realised I was in it.

the heart of south liverpool

Yes, me and friend of the pod, Texas Paul, spent last night very much watching the detectives. Actually Detective (or more properly the vowel eschewing DTCV) and three local Liverpool bands playing the second night of Evil Eye’s Day Of The Dead Weekender. This was the first time I had been to this particular burrito joint/venue in the south of the city, but I was immediately struck by the friendly vibe at the bar and was delighted to find a decent spec in the corner of an already packed front room when the first band started setting up.

This turned out to be the band Stadt Skulls, who announced that they were playing only their second gig. The three-piece (at least from my vantage point) sounded great and played pop punk in the style of Boyracer and Number One Cup. I was particularly impressed by the lead singer/guitarist’s ability to keep propping his glasses back up his nose mid lively song. The bloke next to me and Paul reckoned they sounded like Green Day, but they were much more interesting than that.

As The Skulls (as everyone is now calling them) were finishing up their set, I noticed a very tall American dude and a  stylish petite French woman enter the bar. They clearly weren’t from around these parts and yet no-one batted an eyelid. No-one except me, of course, as I recognised them to be James and Lola from the headlining band or more specifically Jim Greer, formerly of Guided By Voices, Jim Greer, who has written the definitive story of GBV: Twenty-one Years of Hunting Accidents in the Forests of Rock and Roll. THAT Jim Greer. Tex managed to restrain the fanboy me from leaping up and embarrassing myself, but once The Skulls had finished I headed off to the back of the venue to find Jim and ask him to sign my copy of his book and the GBV EP he appears on. Despite to all intents and purposes interrupting their candlelit dinner (top quality burritos out the back albeit not cellophane shrink-wrapped), I was delighted to find a very welcoming set of people.

As followers of this blog and podcast (hello to both of you) will know, to say I am a fan of Guided By Voices is a little bit like saying Donald Trump is a fan of the odd white lie. I fucking love the band and have been obsessively collecting their music for more than 20 years. In that time I have only seen them play live once, so to meet up with a former member and current pal of the band was quite a thrill. Jim indulged me in not only signing my book and record, but also in telling me tales about the band and highlighting a couple of little known truths (see below). 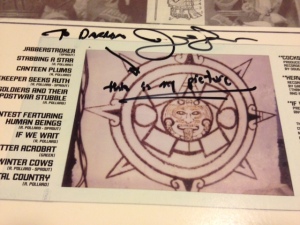 After chatting to the detectives for a while I went back inside with Kyle (the bass player) to see the next band. As we stood at the bar they started up with a burst of tribal drums that immediately grabbed everyone’s attention before launching into a set of Cramps/B52s surf guitar infused songs with reverb heavy Elvis (P not C) type vocals up front. Wow. They were excellent. Nobody around me was aware who they were so I politely enquired what they were called [“Yer fucking great, but who are ya?” – TTW Elocution Ed.] Turns out they were Big Safari and despite feeling that their name didn’t really do them justice (we preferred Poison Ivy or Mystery Plane or…), we will definitely be checking them out again. In the meantime, you can hear a couple of their songs here:

While all this was going on I was chatting to the very amiable Kyle and it turns out he’s Kyle Sowash out of off of The Kyle Sowashes. Yes, I know! For those of you less aware than you should be of the Ohioan rock scene, The Kyle Sowashes put out a couple of albums on Anyway Records about 5 years ago cleverly called Somebody and Nobody. As GBV had also released records on this label, I had checked them out and liked what I’d heard, contacted the label and done a deal on postage to get a whole bunch of their stuff sent over to the UK. Anyway (ahem), both the label and the band are still going strong and Kyle was impressed enough that I knew his band to give me a copy of their latest release (Everybody). What a gent! You can check their stuff out for yourself here.

Up next were local legends Voo, whose alt-rock sound clearly nods in the direction of my Dayton, Ohio based heroes and their set was a tremendous mix of slower soulful numbers and quicker tempo rockers. They went down really well with the crowd, many of whom were obviously long-term fans. The harmonies on their records got a bit lost in the mix, but the guitar sounded particularly fine. I recognised one or two of the tracks from the records of theirs I own, but can’t recall exactly what was played. Have a listen to some of their stuff here (and then find out when they’re playing your town):

So then it was time for the headliners, and DTCV squeezed their impressive array of effects pedals into the corner of the bar. A warm up of the bass line to that Grand Prix song [Fleetwood Mac’s The Chain – AOR Ed.] later and BAM!! Possibly the loudest gig me and Tex have witnessed since The Lucid Dream at the Liverpool Psychedelic Festival a couple of years ago. This band does rock. Mixing French and English lyrics Lola is an impressive frontwoman ably supported by Kyle on lowslung Peter Hook style bass, Jim on screeching guitar and the wild intense drummer (whose name I didn’t catch, sorry). They soared through tracks from their current Confusion Moderne album in a way that brilliantly combined 60s French insouciance and post-punk Magazine. Lola’s guitar had a Buzzcocks sticker on it and that seems apt. Highlights included Radio Drive (from previous LP Uptime!) and a song about a Vampire (I think). Truth be told it was all great and it was fantastic to have them play in my adopted hometown 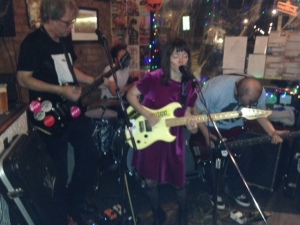 Please check out the DTCV back catalogue on their bandcamp page and at dtcvband.com

They are continuing their UK tour in Glasgow tonight followed by Durham, Sheffield, Brighton, London and Cardiff and are not to be missed.