Two wizards and a Scouse cowboy walk into a bar… not so much the start of a joke, but rather the factually correct beginning to a top Thursday night of musical entertainment in the heart of Liverpool.

Yes, Kicker, Rebel and Tex made their way to the wonderful Kazimier venue only to find it closed. A round of beers later and we successfully made it inside to catch the first of three bands performing. We were told what they were called, but didn’t catch it. They may well be Lime Bastards. Or not. In any case they were excellent. So good in fact that Rebel Rikkit suggested we should form a TTW record label purely to release their stuff. The opening song was all jangly guitars and soaring vocals (‘tuney’ said Rikkit), but the two highlights for me were the song that shamelessly stole from The Fall’s Big New Prinz (as Tex said, it shows class to steal from a band when they were at their peak) and a really funky ‘disco’ number that sounded unbelievably good. So, boys, if you’re Lime Bastards, or even if you’re not, get in touch!

Stop the (word)press! Thanks to fellow gig-goer, Cath Bore, we have discovered the band in question are Oranj Son and they look like this:

A second support band, who may have been called Lime Bastards… (you get the picture), were also highly entertaining with their pleasingly distorted vocals and a swamp rock sound reminiscent of the best bits of Gallon Drunk. Sadly, we were all too preoccupied with planning our inaugural release to take any pictures of either of these two new exciting bands. I hope our paths will cross again.

We did though get ourselves sorted for the main act of the evening, legendary punk/post-punk/punk soul/blues rock/rock band, The Saints. Still led by the enigmatic frontman, Chris Bailey, the band now operate as a three-piece with be-capped guitarist Barrington Francis and drummer Peter Wilkinson making up the formidable numbers.

The band were formally touring last year’s King Of The Midnight Sun release (itself a roughed up version of the 2011 King Of The Sun LP), so it was no surprise that the set started with three songs from the new one. With a band now nearly 40 years into their career, this might not necessarily bode well, but the strength of the new material here shone through. Opening with the title track and then the laconic ‘la-de-bloody-dah’ of A Million Miles Away, the band were right at it from the off. 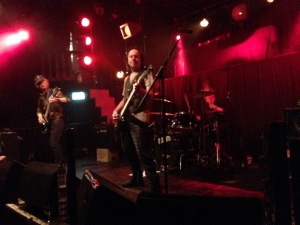 The band also took an early dip into the underrated Spit The Blues Out LP for standout track Waiting For God (Oh!), introduced by Bailey as a chance to bring some highbrow culture into our lives. I’m not sure it did that, but it certainly rocked. To be fair though, all the songs so far were about to be overshadowed by a muscular rendition of Kicker’s all-time favourite Saints song (and one he regularly drops in any top songs of all time lists he’s asked for*), the mighty This Perfect Day. With the ferocious guitar line cutting back through the ages and Bailey still snarling in a way only a fucked-off Aussie really can, this was a definite highlight.

* you’d be surprised how often this happens

Wizard excitement continued to rise as the set continued with two songs from Rebel’s favourite Saints release, the Paralytic Tonight Dublin Tomorrow EP – here inevitably dubbed …Liverpool Tomorrow. Both Call It Mine and the wondrous Simple Love were clear crowd favourites too.

At various points Bailey engaged the crowd in discussions about Mars Bars and Bono and was happy to shake the hand of anyone who had blanked the latter. But more to the point he was happy to play some, perhaps, less well known tracks from his immense back catalogue, like the slow burning Messin’ With The Kid (from their (I’m) Stranded debut), a rousing Know Your Product (how did Barrington play the guitar riff, rhythm AND brass parts?!), and a great version of In The Mirror (from The Monkey Puzzle). 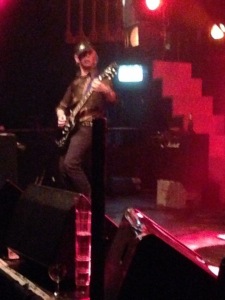 We were also treated to both Ghost Ships and Just Like Fire Would – the latter, in particular, featuring a much more aggressive guitar sound than on record. The band were called back for numerous encores and despite not playing (I’m) Stranded, sent everybody home delighted with an extended version of their cover of River Deep Mountain High that really showed off Bailey’s bass playing, and a rousing No Time (another of Kicker’s favourites from their debut).

All in all, a fantastic night was had by the small, but enthusiastic crowd (Bailey commented that ‘you may be small in number, but you are large in heart’).

The Saints, then, they’ve still got it. Nous fuckin’ t’aimons. 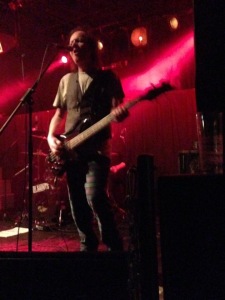 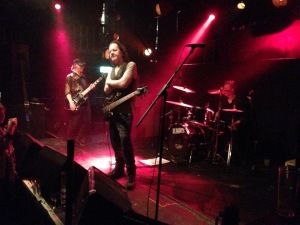 mars bars? not in a psycho-sexual sense

Posted by kickerofelves1 on May 29, 2015 in Blog posts, Gig reviews and tagged liverpool kazimier, the kazimier, The Saints.