What Song Should You Play At Your Funeral?

What is a funeral for? Mourning? What is mourning?  Is a funeral a chance for people to simply remember the deceased or is there more to it than that? Perhaps it’s a process of gaining an understanding, not just of the person, but also of the role they played in our lives and a chance for the mourners to come to terms with their loss.  Traditionally, the affair is stark and sombre and people stand stoically through the service or gently weep into their handkerchiefs.  Everyone dressed in black with slow and sad music creating a grave sense of foreboding. But let’s face it, this is the last act of your time on earth, the cherry on the top of your life cake! Do you want your last hurrah to be a wet weekend or do you want your legacy to be a party so wild that when the mourners wake up the next day they wish they were dead as well? 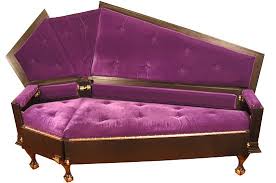 Let’s look at the options and the musical accompaniments:
To acknowledge the loss
Very much traditional as described in the introduction. Maybe after the funeral march a bit of Joy Division – “When will it end when will it end.”  That should have the handkerchiefs moistened nicely.
To set the record straight
It may not be a surprise to discover that the most popular song to be played at funerals is ‘My Way’, but what are people’s motivation for this?  Very questionable in my opinion.  Every life has its twists and turns and not every choice we make is to be appreciated by all those around us.  Take Hitler for example, even the most fair minded observer would have to admit that some of his choices were unwise.  That’s not to say that most of us get things that wrong, but mourners could probably give an example of when the corpse had done it their way and it was a disaster.  Still the congregation have to suffer the voice from the grave saying “the record shows it took the blows and did it my way”.   Yes, you did, you arrogant, selfish, violent, cheap, stupid creep and we would forgive you for all these things if you would only stop trying to justify yourself.
To celebrate
This is not a new phenomena; from Vikings burning boats to the one minute’s applause at a football match, the idea of the funeral as celebration is common-place.  However, at a funeral there is a corpse lying in the corner of the room. Would this not make anyone feel uncomfortable? What if the corpse was a 18 year old who died in a tragic motorcycle accident? Is this the time we want to hear Russ Abbot sing ‘Atmosphere’ (“…love a party with a happy…”). Don’t we have a right, nay duty, to be sad at such a time?
To put a single life in perspective against the weight of human suffering
Perspective is a great tool for helping us to deal with personal loss.  You may have lost a loved one, but considering the poverty and disease that much of the world lives with every day, and the conflict ravaged places where death is a constant reality, maybe you should count your blessings.  So, to get the congregation to set this funeral event in context, may I recommend this:
To get people finally to listen to music you like
Look, there are lots of choices you could make to get the right atmosphere at your funeral to help people deal with you not being there anymore, and the music will, crucially, set the scene.  However, consider a further point.  You may, like me, have spent much of your life bombarding people with music you like only to be ignored by people who don’t share your taste (let’s call them ignorant and stupid). Well, here you have a window of opportunity where people have to sit quietly and listen to whatever songs you you choose.  It’s your final mix tape.  Are you going to blow this chance to get all your friends and relatives to appreciate that Swedish gothic indie band you have been into for years, but no-one else understands?  Thought not! Mourn on grievers!
The trust the wizards funeral vault
We are all of course in grave danger.  We never know when our time is up and you can’t always plan ahead.  Imagine being in the coffin and hearing the minister calling the mourners to have some moments to reflect and hearing Robbie Williams ‘Angels’ being played.  Let’s face it,  a fate worse than death!  We can help you guard against this tragedy. Send your funeral songs to us and we will put them in our vault to be released on your death.  Simply insert a simple clause in your will and the song will be released at the appropriate moment. 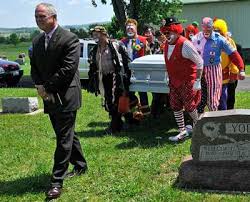 Remember use the Trust The Wizards Funeral Vault to avoid a Fate Worse Than Death!

The Vault is Now open and have a look at its contents in the Spotify Playlist Below!