Not an instrumental to start this month, but rather a timely story of how things kick off in Wrexham from the Writing The Wrongs release by Poundstore Riot, a beguiling combination of Ash Cooke and Stu Kidd (The Wellgreen Derrero, anyone?). 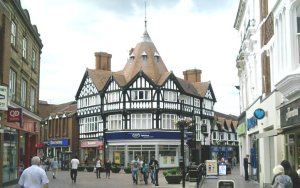 there’s a riot going on

This then launches us into the opening track from my favourite noisy LP of 2015 from Stockholm punk kids, Lucern Raze, appropriately entitled Stockholm One. This in turn eases us into the droning tones of Garbanzo faves, Moon Duo, with my pick from their excellent Shadow Of The Sun collection. Next up it’s New Zealanders, Opposite Sex, with a track taken from a wonderful compilation of contemporary ‘Dundedin Sound’ bands called, er, Temporary. Anyway, you can get it here, and you should. Sadly, this wonderful track is not on Spotify so here’s a live version – click on the link in the track listing for a version with no twats talking all over it.

Primitive Parts put out a single on the always reliably ace Faux Discx at the end of last year, and unsurprisingly it really is rather good. You need to hear this powerpoppostpunkpop hit and then you need to rush to buy the one remaining copy of it here. Old favourites next with Swearing At Motorists and a lovely little song about a lost art taken from last year’s While Laughing, The Joker Tells The Truth that the band tells us “will sound best when played at 3/4 to maximum available undistorted volume level on stereophonic equipment”, so do that then. Going back even further, all the way to March of 2014, saw Stiff Little Fingers release their tenth studio album called, ahem, No Going Back. Ah. Well, in any case, it’s got this great song about the banking crisis that is definitely worth 4 minutes of your time. Then it’s time for more Welsh magnificence from the Cardiff band Wrongs, who might not be on Spotify, but are on bandcamp. These fellas came to my attention via the ludicrously underused Pulco Forum (an anagram of Cup Roomful, rather pointlessly) that you could do a lot worse than join. This song has an oblique reference to QPR that should please at least one wizard and includes the line ‘my kingdom for a mixtape’, which, frankly, is genius.

Talking of genius, Doug Gillard guitar genius next on an unsung track from Guided By Voices first final LP, Half Smiles Of The Decomposed that has recently caused some debate in some circles about exactly what Pollard is singing at the start. What do you reckon? While you mull that over, here’s this month’s Tex Pick, which features an offshoot band from the wonderful Islet in the form of the pleasingly named Them Squirrels. There’s a lot to like here, especially if you are fans of the Islet bass player, and who isn’t? Check out their Exchanging Sayings album toot sweet. Another old favourite next, this time from from the mists of 1996 and a Sparklehorse B-side from the Someday I Will Treat You Good EP that makes use of the words of William Blake, but still sounds very Mark Linkous. A great, much missed artist. To cheer us up after that, how about some Italian pop from Brunetta E I Suoi Balubas with another song you’ll just have to watch…

More Faux Discx delightx next with Teardrop Factory, “a messy indie rock band from Brighton” who put out their Thrash In The Heart  debut LP at the end of 2014. For the GBV fan inside all of you, there is much to like here. Back in the day, poet Benjamin Zephaniah teamed up with Humberside legends Back To Base to record a number of great tracks. One of these, Electric Eye, got played a lot by the late John Peel as I discovered last week when, having restored my tape deck, I started listening to old JP programmes. It still sounds pretty great to these ears. The track after that was apparently a hit, but I must’ve missed it. It only came to my attention recently via the aforementioned Lucern Raze who do a cracking cover of, yes, Teddybears…

Next up is a track I discovered on the Stewart Lee curated The Topography Of Chance compilation that amongst the likes of Derek Bailey and Giant Sand also featured the intriguing sound of Daniel Patrick Quinn and the voice of Duncan Grahl outlining an Edinburgh based ritual. Perhaps unsurprisingly this too is not on spotify…

Sydney band The Moles dominated much of my listening experience in the early 90s and it is always a pleasure to dip back in to their small, but perfectly formed back catalogue. On the self-titled EP from 1992, you will find 4 blistering tracks including the one picked for this mix. A band I have to confess to having missed until now are the bravely named The New Lou Reeds. From the heartland of all good music, the state of Ohio, this lot are a definite favourite of Julian Cope as I discovered on reading his collection of album reviews, Copendium. Happily the partner CD to this tome featured The Reeds (as nobody calls them) and I am happy to share them with you. As I am the sound of more Aussies, this time Pond with a track that stood out for me from this year’s Man It Feels Like Space Again. This is an album that has proved to be a real grower and that I probably underrated on first listens. Talking of underrated, how about the music from Joe Strummer’s lost years? In particular the Earthquake Weather LP and Island Hopping single from the late 80s? Well, I reckon there’s much that has been overlooked here and finish this month with a track from the EP that needs to be heard. Of course, Strummer was busily working on a number of soundtrack projects at his time including this masterpiece…

Those all important tracks in full:

4. Opposite Sex – Supermarket (can be heard properly right here)

6. Swearing At Motorists – Wrote You A Letter

9. Guided By Voices – Gonna Never Have To Die

15. Teddybears – Yours To Keep

All twenty-four previous mixes are still available for free! Why not follow us on Spotify to avoid missing out?