Last month saw our founding wizard Kicker of Elves reach his half century. That left us other 2 wizards wondering what we could get him as a present.

As evidenced by the name of this very website and his chosen name, Kicker of Elves is obsessed with the band Guided By Voices. He also loves collecting rare vinyl. So we decided to combine these 2 passions and make him a Guided By Voices record that was truly unique because there’s only one copy of it in the world, thereby making Kicker of Elves the Martin Shkreli of GBV collectors! 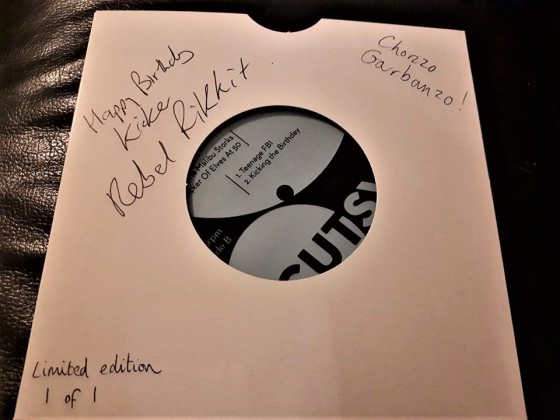 Over to The Malibu Storks a.k.a. Chorizo Garbanzo…

In the absence of an actual drummer I decided to programme the drums using Sonic Pi. This meant abandoning my original idea of covering “In a Circle” because its 6/8 time signature was messing with my head.

Then I remembered Kicker’s blog post in which he named “Subspace Biographies” as his favourite Robert Pollard song so I decided to do that instead. The drum beats and the rather un-GBV bassline were heavily influenced by “Neon Lights” by Kraftwerk, a favourite of mine when out running. I programmed that in about 600 lines of Sonic Pi code. That sounds more impressive than it is and I’m sure a more experienced and effective Sonic Pi user could do it in far less!

The twangy guitar bit is my homage to Glen Campbell who covered the Guided by Voices song “Hold On Hope” on one of his last albums. In the true spirit of Pollardian lo-fi, all of my vocal and guitar parts were done in one take.

About a decade ago Kicker of Elves started bombarding me with GBV tracks initially on CD mixes. These evolved into shared drives and then onto Spotify playlists and blog posts. By this stage he was bombarding not just me, but the rest of the world. Lest we forget that every day in 2014 he published a blog post showcasing 2 GBV tracks each. It worked of course as a whole stack of GBV tunes are now amongst my firm favourites. But which to choose for the contribution to a Kicker dedicated vinyl record. Well, there must always be criteria so see below.

Fortunately there are a lot on online GBV resources to help you so I took to research some of my favourites. Echos Myron, Smothered in Hugs, Tractor Rape Chain, Glad Girls were all considered and dismissed as being too hard to sing. There were plenty more that fell into this bracket or where the guitar just didn’t sound right. Then the lightbulb moment of course, a simple “3 chords and the truth” rock and roll song that allowed a bit of vocal latitude where passion could mask a lack of ability. Or so I thought until I realised that there is what I imagine someone who knew a bit more about music than me would call a key change in the last verse. But too late, I was in too deep so I launched my vocal chords into action and hoped for the best to create a performance that has been called a cross between George Formby and Elvis Costello (esteemed company indeed).

A strange footnote was that Kicker liked my effort but didn’t like the original so the enterprise failed on criteria 2. That left me feeling like a Hot Freak with a Half Smile of The Decomposed to such and extent that I Did The Collapse.

Other Guided by Voices related posts on this website:

Posted by chorizogarbanzo on April 9, 2018 in Blog posts and tagged Guided By Voices, happy birthday, kicker of elves, Robert Pollard.